In order to provide better service for the members of both sides, China Computer Federation (CCF in short) and the Society of Chinese Computer Scientists in Germany (GCI) signed cooperation agreement at the opening ceremony of 13th FCPAE European Forum 2022 and Federation of Chinese Professional Associations in Europe.

Both parties will hold regular joint meetings, participate in important activities of the other party, and publish important information in their own media, besides carrying out activities benefits members of both parties. If the epidemic situation allows, both sides will also have delegate to visit each other every year. 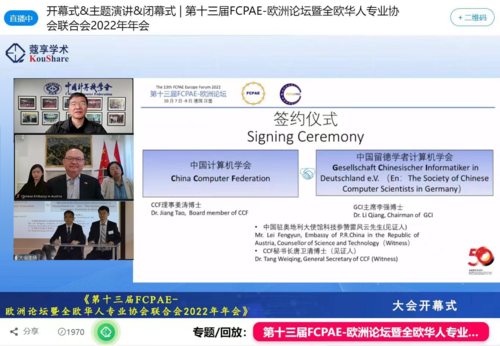 The Gesellschaft Chinese Informatiker in Deutschland e.V. (GCI) was established in 1986 in Karlsruhe, Germany. It is a public welfare organization registered in the Karlsruhe court with more than 500 members by now, and most of them are experts in IT management, research and production who have obtained doctorate or master's degree in Germany. GCI has a large number of talents who are proficient in Internet, database, big data, AI, advanced manufacture, brain-inspired computing, robot technology and etc.

In November 2001, in order to unite more overseas Chinese and overseas students in Europe, GCI initiated the establishment of the Federation of Chinese Professional Associations in Europe (FCPAE) (www.fcpae. com) in Frankfurt, Germany, and was elected as the first chairman Association.