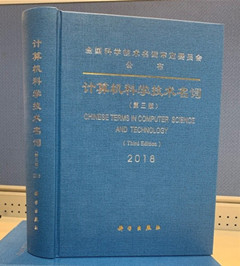 Under the leadership of academician Lu Ruling, director of working committee, "Chinese Terms in Computer Science and Technology (3rd edition)", started in the early of 2009, completed the draft in 2012, showed in the public in 2015 and officially published in December 2018. There are 12 chapters, included 8795 terms in computer science, computer architecture, computer hardware, system software, software engineering, database, artificial intelligence, network and data communication, information security, computer application, computer interdisciplinary and other research fields, totally more than 510,000 words.

Comparing with the previous edition, Chinese Terms in Computer Science and Technology Nouns (3rd edition) is characterized by each term with a brief explanation. With the rapid development of computer and the emergence of new terminology, it has been more difficult for the selection of terminology, even the interpretation of terminology and heavy workload. In 2012, the first edition was drafted, but it took almost six years to work on the revised and finalized edition. During this period, the director and vice-director of the sub-committee went over all the terms and phrases, and asked Academician Jin Yilian, Academician Lin Huimin and Academician Mei Hong, to make a final review of the dictionary.

Thanks to over 200 authorized experts from universities, research institutes and enterprises for their great support and contributions to the completion of Chinese Terms in Computer Science and Technology Nouns (3rd edition), as well as those "not in the payroll" but still put effort and time on it.